On the morning of Jan. 23, 2011, Moore stopped a stolen vehicle in the 3400 block of North Temple Avenue.
As the driver, later identified as Thomas Hardy, and Moore were outside their vehicles, Moore was shot multiple times.
Officer Moore was wearing a bullet-resistant vest but was shot in the chest, the left thigh, and twice in his face. He was taken to the hospital and remained in a coma until his organs were donated on Jan. 26, 2011. Seven people received Moore’s organs, including his heart, liver, lungs, corneas and kidneys.

Hardy, a 60-year-old parolee, was arrested later that evening and held for the robbery of a Dollar General store committed 50 minutes after the shooting. He’s now serving a life sentence for Moore’s murder. Officer Moore was 29 years old when he died and in his seventh year serving with the IMPD and was working in the North District. He was posthumously awarded the department’s Medal of Honor and Purple Heart.

David Moore came to Purdue University from Indianapolis in the fall of 2000. A high school Varsity Football Team Captain, he was a stand-out candidate and was selected to receive a four-year Marine Corps ROTC scholarship. David was a leader in all of his endeavors at Purdue, be it in the classroom, weight room, or in training with the Midshipman Battalion.
When an old football injury resurfaced that prohibited him from commissioning as a Marine Corps Officer, David decided to pursue a career with the Indianapolis Metropolitan Police Department. His spirit and dedication to serve the people of the country he loved never faded and David continued his reputation of excellence while serving with the IMPD. His devotion and skill were recognized when he was awarded Rookie Officer of the Year in 2005, a Medal of Valor for a shooting in the line of duty in 2008, and the Medal of Honor for his actions on the day he was shot.

score will be total rounds plus reps of HSPU. 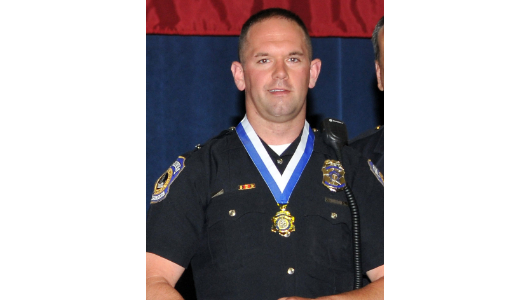